Fidel: Time to reflect on his legacy

This was written for Australia's Green Left Weekly to promote the conference "Fidel in the 21st Century: His Contribution and Ideas for a Better World", to be held over August 18-19 weekend at the New South Wales Teachers Federation building, 23-33 Mary St, Surry Hills, Sydney. Further details are here. An edited version is published in the current issue.
I'll be speaking alongside the Cuban Ambassador to Australia, Mr. Pedro Monzon, in a session titled "Fidel and the renewal of Cuban socialism", on Sunday at 2.30pm.

Fidel: Time to reflect on his legacy
By Marce Cameron 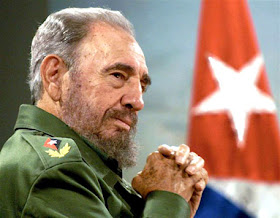 This isn’t an obituary. If Fidel Castro had died I’m sure you would have heard about it.
Every now and again those who hope and pray for his death spread yet another rumour, only to be disappointed by a photo, a newsclip or a commentary in that unmistakable style, confirming that Fidel is very much alive and making the most of his twilight years.

When the inevitable does happen, the world, admirers and detractors alike, will pause for reflection. The corporate media will saturate our inner recesses with words and images that convey, for the most part, how the 1% appraise his life and legacy. Just imagine the gloating on Fox News.

I suspect it will be harder, and take longer, for those who admire Fidel and feel a sense of loss at his passing to be heard amid this din.

The hundreds of millions of the 99% for whom Fidel has been something of a political compass, and a spiritual compass in the secular sense, will want to reflect and recommit to our shared visions of a better world — a world without Fidel, but nourished by his presence in our struggles.

Thus will begin a new battle of ideas, a concept promoted by Fidel. Between the extremes of hatred for the man and sycophantic adulation lies a broad field for critical, nuanced reflection from Fidel’s side of the struggle for socialism.

But why wait for the inevitable before undertaking this task? Better to begin it now, while Fidel is still among us and before the corporate vultures descend on his tomb.

In this necessary, timely endeavour we are joined, first and foremost, by millions of Cubans committed to the continuity of Cuba’s socialist project, the stage from which Fidel has set out to change the world and, to a degree, succeeded.

Would a pregnant woman in a remote East Timorese village be seen by a doctor today if it were not for Cuban medical personnel and medical training?

How much longer might apartheid have dragged on in South Africa if Cuban blood had not been shed in the sands and jungles of Angola and Namibia? Would Venezuelan’s Bolivarian socialist revolution even exist? According to Hugo Chavez, probably not.

In this sense, “Fidel” is something more than an individual. Fidel is certain ethical values, ideas and ideals; a cause and a devotion to that cause. It is adherence to principles but rejection of sectarianism and dogmatism in the struggle for a better, socialist world.

Fidel's essential message is one of hope, that we can reverse the gradual descent of global capitalism into a 21st-century barbarism, besieged by ecological collapse, if we can only unleash the power of masses of ordinary people acting together with a shared vision and strategic compass.

Fidel is, above all, solidarity in a selfish world.

It is asking what we can contribute and share rather than what we can plunder and hoard. It is worrying about the infant mortality rate in Western Sahara and the waves lapping at the doorsteps of Pacific islanders, and doing something about it.

It is internationalism: the rejection of subservient seclusion behind our white-picket fences and national borders decked out in razor wire.

Australia doesn’t have a revolutionary tradition like that of Cuba. After the European invasion and dispossession of its Indigenous peoples the continent developed as an outgrowth of British imperialism.

Relative prosperity for most, thanks to a combination of circumstance and struggle, has blunted radical urges and channelled them into the English gentleman’s game known as parliamentary reformism.

Waves of progressive radicalisation have ebbed and flowed, but none has yet succeeded in placing the country under new management, as did the Cuban Revolution under Fidel’s leadership.

The next one may just do that, opening the way to a very different kind of Australia. Call it socialism or call it whatever, it will have to bury capitalism.

Fidel is daring to dream of such a revolutionary transformation of our own society. And working patiently towards it in ways that are meaningful to each of us, respecting each other’s contributions and seeking the path of principled unity.

Fidel is contributing our little grain of sand to the revolutionary hourglass, recalling that he began his struggle with a handful of idealistic youth with hardly a cent among them.

If you're not signed in with one of the accounts listed in the drop-down menu select "Anonymous" and include your name, or a pseudonym, in the comment. If you have suggestions for improving the blog or its content please email Marce Cameron. All the usual norms of posting etiquette apply. Comments must be respectful in tone, consistent with the blog's aims and relevant. Comments will be moderated accordingly.